With Mountain Lion Apple’s has started to assert it’s strong hold on what can be installed on the system. It’s good in sense that it’s quite fussy about installing applications from unknown sources (read non-Appstore).

Gatekeeper is a new feature in Mountain Lion and OS X Lion v10.7.5 that builds on OS X’s existing malware checksto help protect your Mac from malware and misbehaving apps downloaded from the Internet.

The safest and most reliable place to download and install apps is via the Mac App Store. Apple reviews each app before it’s accepted by the store, and if there’s ever a problem with an app, Apple can quickly remove it from the store.

For apps that are downloaded from places other than the Mac App Store, developers can get a unique Developer ID from Apple and use it to digitally sign their apps. The Developer ID allows Gatekeeper to block apps created by malware developers and verify that apps haven’t been tampered with since they were signed. If an app was developed by an unknown developer—one with no Developer ID—or tampered with, Gatekeeper can block the app from being installed.

I ran into this problem while installing Qt and was mildly puzzled why this happened with Qt. 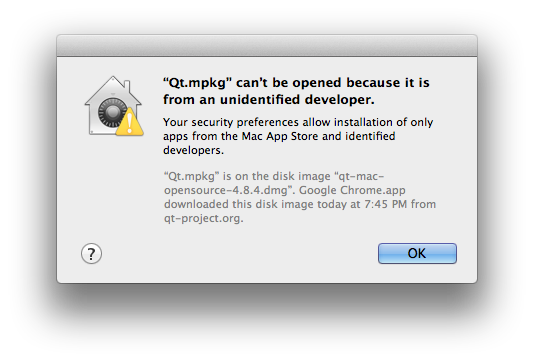 Now there is way to either disabling Gatekeeper security feature entirely or making an exception. Making an exception is easy, all you have to do is to hold Ctrl key and Open the installer and you are all set.